How long will it take Lebron James to become leading NBA scorer? 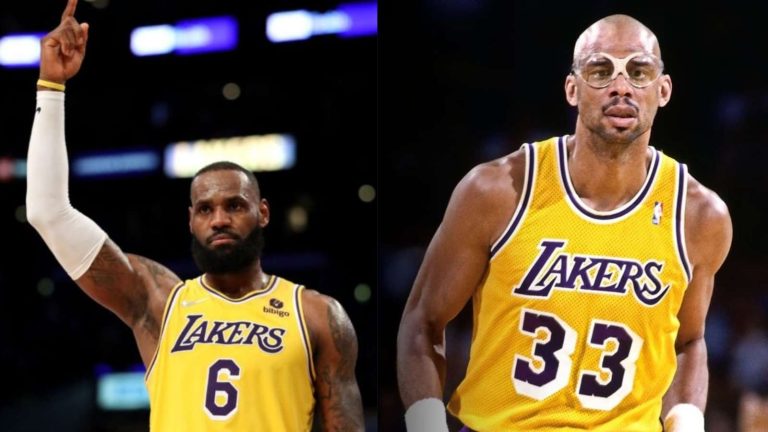 LeBron James is widely considered to be the one of the greatest athletes ever to compete in the NBA. He was the first overall pick of the 2003 NBA Draft by the Cleveland Cavaliers and during his career has also played for the Miami Heat while currently representing the Los Angeles Lakers.

As a high school student, James went to St Vincent-St Mary in Ohio and in his freshman year averaged 21 point and six rebounds per game, taking the team to a 27 game winning streak, not losing a single match on their way to the state championship.

In his senior year he averaged 25 points per game and led the side to a 26-1 record winning his second straight title and winning Ohio’s Mr. Basketball award.

Entering the NBA straight from high school, James singed for his hometown side the Cleveland Cavaliers, being picked first overall in the 2003 NBA Draft. In his first game as an NBA starter, James broke the points record for a prep-to-pro debut by scoring 25 points against the Sacramento Kings.

By the end of the season, he was named the Rookie of the Year, and in 2004/05 he earned his first NBA All-Star Game call up.

In his time in Cleveland, he broke individual points records as well as winning the NBA MVP title twice, in 2009 and 2010.

James has gone on to win two more MVP titles, both in his time at Miami Heat, who he moved to when becoming an unrestricted free agent at the end of the 2009/10 season with Cleveland.

His time at Miami brought him his first two NBA Finals Championships, in 2012 and 2013, where in both these victories he was also named the NBA Finals MVP.

In 2013/14 James set a career high, and franchise record, 61 points in a game against the Charlotte Bobcats in a season which ended in the finals to defeat to the San Antonio Spurs. This ended Miami’s hopes of a three-peat and was the final season for James in Miami before returning to Cleveland.

Since James left Cleveland, the Cavaliers has won 97 and lost 215 games. With James’ return they went on to win their first NBA Championship as a franchise in 2016, it was the cities first major sports title in 52 years and the first time an NBA side had won the championship coming back from being 3-1 down.

Since 2018 Lebron James has been with the Los Angeles Lakers and won his fourth NBA Championship in 2020; in each of his four titles he has been named the Finals MVP.

This year his Lakers side missed out on the playoffs, finishing 11th in the Western Conference. But the betting is open for next season’s MVP award, with LeBron James priced at +2,500 in the NBA betting, suggesting he’s an outsider, but it’s not beyond the realms of possibility.

James will go back to preparing for another season in the NBA in 2022/23 with a desire to get back to the playoffs, as well as being in the hunt for one of basketballs biggest records.

A 38-year record of 38,387 points looks set to be broken by James in the coming season, a record which before his arrival and success in the NBA looked unbeatable.

James is 1,325 points behind Abdul-Jabbar which, taking into account his career average of 27.1 point per game, would take him 49 games to reach. The title is not a matter of if he can take it, it is now a matter of when.

What’s remarkable about LeBron James is that he hasn’t hit the scoring peaks of others on the list during their careers, he has remained consistent throughout his career. This season he became the first player in NBA history to achieve an incredible career record, the career triple-quintuple of 10,000 points, 10,000 rebounds and 10,000 assists.

James could see his name plastered across more records next season should the Lakers, who were favorites for the Western Conference this season, achieve their expectation next year.

Should The Lakers turn things around in 2022/23 and reach the finals, on James’s Finals form of 28.4 points per game, he would need just five games to take the title. This individual title requires a lot of support from the side who missed the playoffs this season.

Once James takes the points record, his final tally will all depend on how long he continues to play. The record that will be set by one of basketballs all-time greats will surely live on like Abdul-Jabbar’s has so far, needing another special player to challenge again.