By RockyDecember 12, 2022No Comments5 Mins Read 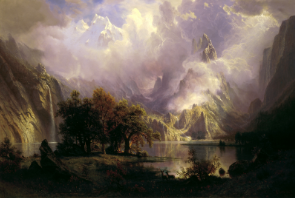 When it comes to the greatest landscape painters of all time, a few names come up repeatedly. On the European side, there are many greats, such as Claude Lorrain, J.M.W Turner, and John Constable, to name just a few.

While on the American side, there is one landscape that stands out above all the rest. That painter’s name is Albert Bierstadt. Although born in Germany, Bierstadt made his name in art by painting the rugged frontiers of the American West.

As a Romanticist painter, no one could capture the glory and magic of a scene better than Albert Bierstadt. His paintings are a masterful mix of Realism and Romanticism and have a fantastic air of mystery and wonder beyond comparison. With that being said, let’s look at some of Albert Bierstadt’s finest paintings and what makes them so magical and mysterious.

First, Albert Bierstadt was a master of setting a mood, and his ability to capture the moment’s essence was second to none. In the landscapes he painted, he was somehow able to perfectly encapsulate and extrapolate all the divine perfection held within a single moment in time.

Like any good painting, Albert Bierstadt’s artwork inspires amazement and awe and makes an everyday scene, such as a natural landscape, seem truly breathtaking and special. The level of detail and realism is almost inconceivable, while at the same time, there is also a distinct impression of romance and mysticism.

Bierstadt was able to do this by using several methods. First, it can be broken down into three distinct aspects, light, cloud, and shadow. His painting Rocky Mountain Landscape is a perfect example of this and is so well respected that it is currently on display in the White House of the president of the United States.

Among The Sierra Nevada Mountains 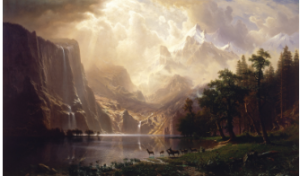 Among The Sierra Nevada Mountains California  Painted by  Albert Bierstadt

To expand on these three aspects, let’s look at one of Albert Bierstadt’s most famous paintings, Among the Sierra Nevada Mountains. This exquisite masterpiece wonderfully showcases all the trademarks of an Albert Bierstadt painting.

Bierstadt was seemingly fascinated by the enormous mountain ranges of the American West, and much of his artwork is dedicated to them. Furthermore, the common theme of a majestic mountain range accompanied by the rays of the sun shining through the clouds and the reflective surface of a lake below often recur in his work collection.

The sun, obstructed by clouds and only partially visible, achieves an added sense of divinity to the illuminated mountain. This illumination greatly heightens the beauty and scale of the mountains. At the same time, the shadows and water below invoke an understanding of the silent mystery that has been present since the very beginning.

Speaking of mystery, let’s dive a little deeper into the mysterious nature present in Albert Bierstadt’s art. Nature has always been a great source of mystery and wonders for human beings, and Bierstadt’s paintings perfectly embody this uneasy sense of the unknown.

Human culture has always consisted of myths and fables that tried to answer the questions posed by nature, such as what’s over that mountain or under that lake? Albert Bierstadt paintings can be viewed as visual representations of these timeless myths being spun into the modern painting medium.

Just like the myths and legends of old, Bierstadt’s artwork is an invitation to answer this call of nature and invoke that curious sense of exploration and adventure that sits within us all. His sunrise and sunset paintings, of which many, do exactly that and leave the viewer gleefully pondering the meaning of life.

Sunset on the Coast

Sunset On The Coast  Painted by  Albert Bierstadt

Due to the large repertoire of sunset paintings within Albert Bierstadt’s collection of artwork, it is worthwhile to expand on them further. It could be easily argued that in all of nature, there is no greater symbol of the mystery of life than the sunset.

Albert Bierstadt shared this sentiment as the setting sun features as the main character of his paintings time and time again. The Buffalo Trail, Emigrants Crossing the River, Evening on the Prairie, and the Oregon Trail are just a few examples of Bierstadt’s breathtaking sunset paintings worth checking out.

As it washes over the land, the overwhelming orange glow of the setting sun sets a mood of mystery like nothing else in all of nature. Bierstadt’s ability to capture and recreate this mood and tone onto canvas is arguably his greatest achievement as an artist.

The Domes of Yosemite

The Domes of Yosemite Painted by Albert Bierstadt

Just like his sunset paintings, Bierstadt also produced many works of art dedicated to the beauty and radiance of waterfalls. Waterfalls have also been a source of amazement to humans for thousands of years and have a longstanding history as places of magic and mystery in many cultures worldwide.

Like a sunset, a waterfall inspires feelings of tranquility and leaves you with an impression of just how beautiful life can be. They also act as the perfect centerpiece for the symbol of mystery, in the exact same way a gigantic mountain of golden sunset does.

In Albert Bierstadt’s waterfall paintings, such as the Domes of Yosemite and Bridal Veil Falls, there is also a distinct element of fantasy. This is also a common theme found within Bierstadt’s art, as his paintings are so brilliant and epic they almost seem as though they are the stuff of pure imagination.

Albert Bierstadt’s landscape paintings perfectly express the incredible mystery that is life. Their astonishing realism, dramatized romanticism, and subtle mystery makes them must-see for any appreciator of art.