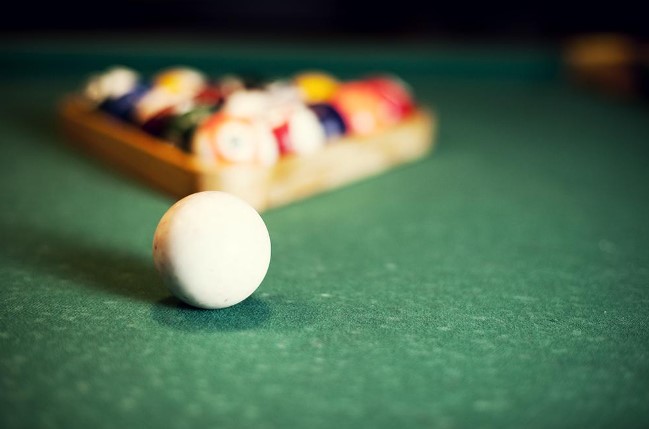 Carom Billiards is a game of skill and has been around since the time of Shakespeare in the 15th century and even before that, during the time of King Louis XI of France who reportedly had the first known indoor billiard table. The game was also very popular among British Army Officers in the 1870s and played on a rectangular shape table using a cue and billiard balls. Billiards used to be very popular to the extent that Mozart, Marie Antoinette, Napoleon, Abraham Lincoln, Mark Twain, and George Washington were among the enthusiasts of the sport.

Later, the game evolved and gave birth to two popular variants: pool and snooker. Although snooker and pool use the same types of equipment, they differ in ball size, table size, and even rules.

Playnowpros : The main difference between the two games is the balls used to play. Snooker uses twenty-two balls, including a white ball known as the “striker” or “cue” ball. The rest are fifteen red balls, and one each of yellow, brown, blue, pink, black, and green. Each ball is 2 1/16 inches in diameter. On the other hand, in pool, the number of balls changes depending on the game variant. However, a full set of balls consists of sixteen balls, each 2 1/4 inches in diameter: eight balls of solid color numbered one to eight, seven balls with a stripe of color numbered nine to fifteen, and a solid white “cue” ball. The newest and most addictive form of pool games is the online “8 Ball Pool” which was first released on 2010.

To most people, especially amateur players, the rectangular green table used to play snooker, billiards, and pool look identical. But the truth is that they are quite different.

On the other hand, pool tables are smaller than snooker tables. British pool tables are 7ft in length but come in 6ft and 8ft too, whereas American standard pool tournament tables are 9ft. In addition, UK pool tables use napped felt to make friction and slow down the balls.

The objective of billiards games is to score points, called “counts”, by bouncing one’s own cue ball off of the other two balls on the table.

Pool has the same objectives as billiards but it is played with pockets. Multiple variations of pool are available, but in the UK, the most common is the 8-ball pool, which involves 7 yellow balls, 7 red balls, a white ball, and a black ball. The red and yellow balls are put into a pool triangle, with the black ball in the top center. The white ball is placed at the opposite end of the table, and the triangle is removed.

The first player starts by hitting the white ball with their pool cue, aiming to break the triangle of balls at the other end. If one of the colored balls goes in a pocket, this is now their color and they can try to pot another one in, using the white ball. Their turn ends when they fail to pot a ball, pot the white or opponent’s color ball, or the ball comes off the table. If the player pots the black ball before the end, they have lost. Once all a player’s colored balls are potted, they must pot the black ball to win.

On the other hand, snooker is a much more complicated game. The game objective is to strike the white cue ball so that it strikes the colored and pink balls in turn and causes them to fall into one of the six pockets. Points are awarded for legally potting balls under the rules outlined below, or when the opponent commits a foul-pockets the wrong ball.

The yellow, green, brown, blue, pink, and black snooker balls, each worth a different number of points, are all placed in a specific position on the table. The 15 red balls are placed in a triangle towards the edge of the table. Players take turns using the snooker cue to hit the white ball to pot a red ball.

If they successfully pot one, they can then attempt to pot a colored ball for points, in the specific order of yellow (2), green (3), brown (4), blue (5), pink (6), and black (7). Between each colored ball, they must pot a red ball. After each player’s turn, the red balls stay in the pockets but the colored balls return to their original positions. In the end, the player with the most earned points is the winner.

To Sum It Up

Billiards game and its derivatives- snooker and pool- are quite popular all around the world and pretty fun to play. If you learn to play snooker, you can easily learn to play pool. But if you learn pool first, you need some more training for snooker. Although both games have quite similar pieces of equipment and share similar rules, snooker requires more skills and practice to be mastered.