How does a rotovap work ?

By JakariaDecember 29, 2021No Comments6 Mins Read 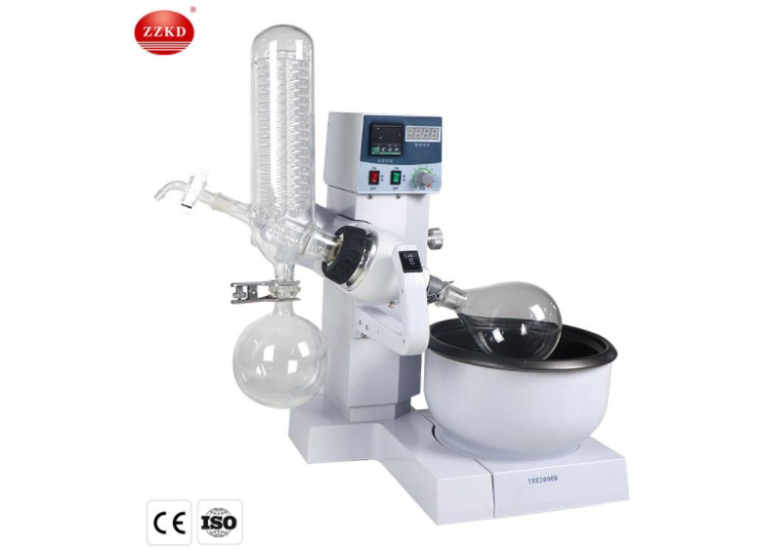 What is a rotovap

A rotovap is the equipment used in chemistry labs to evaporate liquids from samples efficiently and delicately. The word “rotary evaporator” may be used in the chemical research literature to describe the employment of this technique and apparatus. However, use is frequently denoted by a different language. Moreover, rotary evaporators are also used to make distillates and extracts in molecular cooking. During routine laboratory manipulations, it is very common for the desired compound to dissolve in a solvent. In separatory funnel extractions and column chromatography, solvents are used, and the solvent must be removed to isolate the desired compound. Solvents with lower boiling points than the chemical of interest are frequently used to have their removal mechanisms. Although a solution may theoretically be put on a heat source to boil away the lower-boiling solvent, this method is rarely done. A rotary evaporator is a primary technique for solvent removal in the laboratory.

A rotary evaporator is simply a low-pressure distillation device in which a solution in a round-bottomed flask is put in the apparatus’ water bath and spun. When it comes into touch with a water condenser, the solvent vapor condenses and drops into a receiving flask. At the same time, the system is partially evacuated (by a water aspirator or vacuum pump). Because of the lowered pressure in the apparatus, the solvent boils at a lower temperature than usual, and rotating the flask increases the surface area of the liquid and, consequently the rate of evaporation. The concentrated chemical remains in the flask after the solvent is removed. Distillation and rotary evaporation vary in that distillation typically retains the distillate, whereas rotary evaporation typically retains the residue.

For various reasons, rotary evaporation is preferable to evaporation at atmospheric pressure. The method is substantially faster, less than 5 minutes, utilizes lower temperatures (reducing the risk of breakdown), and consumes less energy than boiling with a heat source. A rotary evaporator also effectively removes the last vestiges of residual solvent from a solution because it uses low pressure. A rotovap comes in various sizes, from mini rotovap to large rotovaps.

Even though the rotary evaporator appears to be sophisticated, it is rather simple.

A motor unit, a vapor duct, a vacuum system, a heated fluid bath, a condenser with either a coil flowing coolant or a “cold finger,” a condensate-collecting flask, and a mechanical or motorized mechanism are the essential components of a rotary evaporator or “rotovap.” In a rotary evaporator, the motor rotates an evaporation jar or vial that contains the participant’s sample. The vapor duct, a vacuum-tight conduit for removing vapor from the model, rotates around the sample rotation axis. The vacuum system significantly reduces the evaporator system’s pressure. A vacuum system can be made up of a water aspirator with a trap submerged in a cold bath or a regulated mechanical vacuum pump with a cooled trap. A heated fluid bath, usually water, is used to heat the sample.

Depending on the evaporation goals and any propensities the dissolved compounds could contribute to the mixture, the condenser utilized in rotary evaporators can be simple or complicated. The distilling solvent is caught when it re-condenses in the condensate-collecting flask, situated at the condenser’s bottom. The mechanical or motorized mechanism swiftly lifts the evaporation flask from the heated bath.

Evaporation requires sophisticated engineering to remove solvents from a sample adequately. Most rotovaps use a vacuum and pressure control monitor to manage pressure within your system, enhancing evaporation efficiency accurately. This equipment must operate without fail 24 hours a day, seven days a week, in many commercial labs.

When buying a rotovap, consider a few things such as the rotovap price, manufacturer material.

Some general rules for usage of a rotary evaporator

Tips and tricks for rotovap evaporator

To avoid scale buildup in the bath that coats the thermistor and heating coils, use distilled water in the heating bath. It is tough to remove and diminishes the bath’s efficiency. Furthermore, regular tap water, especially during the summer months, promotes the establishment of breathtakingly unpleasant algal colonies. The ideal strategy is to replace the water regularly. When working with nitric acid, all usual safety measures must be observed! To clean algal muck from the interior of a coiled water condenser, remove it from the rotavap and immerse the coil in a weak nitric acid solution for a few hours. The rotavap is rebuilt after thoroughly washing the insides.

In conclusion, a rotovap is a useful device used for distillation. The above tricks and tips will guide you on how a rotovap works and the dos and don ts.