Old Doge, New Tricks: Why Dogecoin Could Rise Again In 2021 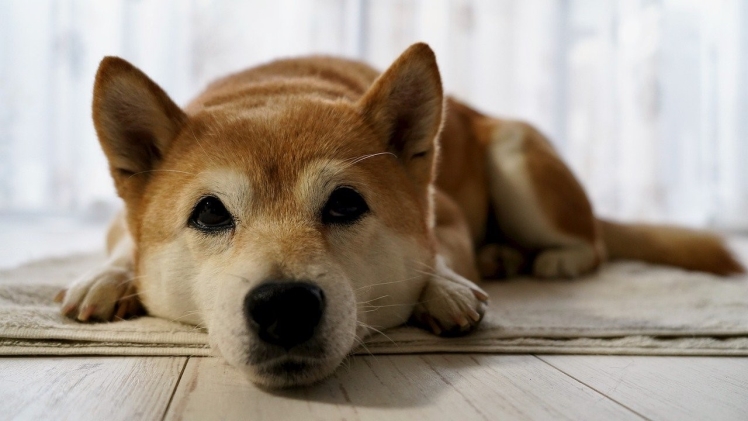 The cryptocurrency market exuberance ran a little too wild to start 2021, with investors making fortunes on meme coins, short squeezes, and a stimulus-check funded buying spree of assets.

Few assets benefitted from the frenzy as much as the likes of GameStop (GME) shares or Dogecoin (DOGE). Much of the uproar over GameStop has since been stifled. And although some bite was taken out of the Dogecoin rally, this old dog still has plenty of new tricks up its sleeve, and could just be playing dead before going on another incredible rally.

This guide provides an overview of what is going on around the world of Dogecoin, and what factors could drive prices higher this year, potentially to one dollar, the moon, and beyond.

Why Does The Crypto Mainstream Love Meme Coins?

The cryptocurrency community is an unusual space filled with pseudonymous characters that can in general do and say what they want. This leads to an enormous amount of what the internet calls “shitposting” where heckling others, sharing memes, and posting misleading information is considered funny and done for the laughs and audience-building.

Followers of such accounts share these memes with their own commentary and it spreads virally. This trend exists everywhere on the internet outside of crypto, but in crypto it takes on financial undertones. Memes joke about extreme losses or potential wealth and the cars one might drive if they strike it rich.

Even Dogecoin, a coin literally based on a meme and born on Reddit, is a favorite among this crowd who cheer the literal and figurative underdog on. Since this trend began, Dogecoin rose from deep down the ranks of the top 100 coins per CoinMarketCap, to rising to number four behind Bitcoin, Ethereum, and Tether at one point.

Too much chasing its own tail tired this playful dog out for a while, and the cryptocurrency failed to reach the hopeful target of $1 per DOGE. It topped out in the mid-$0.70 range, and fell drastically to under $0.20. After a short nap, this dog is ready for another run.

Why Does Elon Musk Love Dogecoin?

Not only does the mainstream public prefer Dogecoin due to its lower cost of entry and potential to reach $1, but there’s also widespread celebrity support ranging from Snoop Dogg to Gene Simmons, but most notably Elon Musk has acted as a frontman for the coin for some time now.

Musk took the stage on Saturday Night Live as the “Dogefather,” but his antics caused the cryptocurrency to sell off instead. Still, he continues to support the cryptocurrencies saying it is among his favorites and the few coins he holds alongside Bitcoin and Ethereum.

Musk says that Dogecoin has several benefits that the other coins don’t and himself works closely with Dogecoin developers to build the future of the blockchain and optimize code. Musk has come out in support of Dogecoin several times over the last few years and his support isn’t going to wane any time soon. He’s more than happy to discuss the coin publicly and even entertained the idea of Dogecoin conferences and other community based events. In fact, he apparently attended an alien-themed moon-party after his SNL performance where he was joined by a slew of high profile celebs.

Dogecoin continues to be a hot subject all over social media, with the altcoin capturing the interest and spirit of investors everywhere. Videos related to Dogecoin on TikTok range in the millions, while the cryptocurrency was recently trending on Twitter.

Facebook groups have emerged and it isn’t uncommon to see Dogecoin discussion enter groups related to other coins on the platform. Part of the reason for the popularity on social media is because Dogecoin is cheap, and anyone can buy it. There is also enough supply to go around, unlike other cryptocurrencies.

The downside with the large supply is that whales own the most supply currently, but as they sell off into eager buyers the cryptocurrency will become more decentralized. This will occur even faster as more people enter Dogecoin and adoption grows. If the adoption trend can sustain, it should lead to a return of price appreciation.

If coins begin pumping again, the best way to make money is to head to a cryptocurrency margin trading like PrimeXBT. Such platforms let users long and short cryptocurrencies using CFDs. Long and short positions give traders the ultimate flexibility over volatile crypto assets.

When markets are falling, traders can go short and profit from a downtrend. When prices are rising, a long trade could be more profitable than holding coins alone.

In terms of what might happen next for Dogecoin, the asset is clearly at a pivotal point, and close to a true price explosion, or a possible collapse. If history is to repeat, Dogecoin breaking out from its downtrend could suggest that a massive rally could be coming. 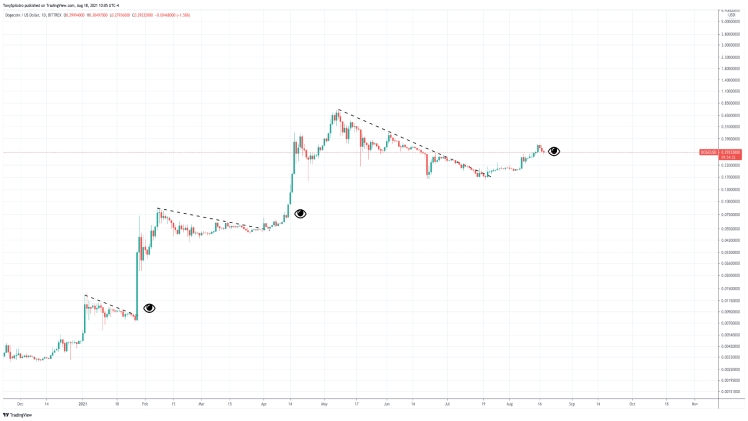 This Dog Is Ready To Get Barking Once Again

According to the last two times Dogecoin broke out from downtrend resistance on the DOGEUSD trading pair, the cryptocurrency had an even larger rally than that previous run. With the most recent downtrend being the longest yet, and consolidation post breakout is also taking longer than in the past, the next move up could be the most explosive yet.

DOGEUSD is currently holding the level that allowed it to rally to more than $0.70 per token, and the target of the structure given the increasing returns each rally, could mean that the target of $1 per DOGE is finally reached.

Reaching $1 could be a self-fulfilling prophecy at this point and the key to widespread FOMO in Dogecoin like never before. The mainstream media headlines pointing out the $1 target being reached and the money it made everyday investors could prompt another huge wave of capital into the crypto market. Simply put, this old Doge might have plenty of new tricks left if another rally breaks out across crypto.