WOW! A New Edition of Cards Against Humanity for Disney Fans 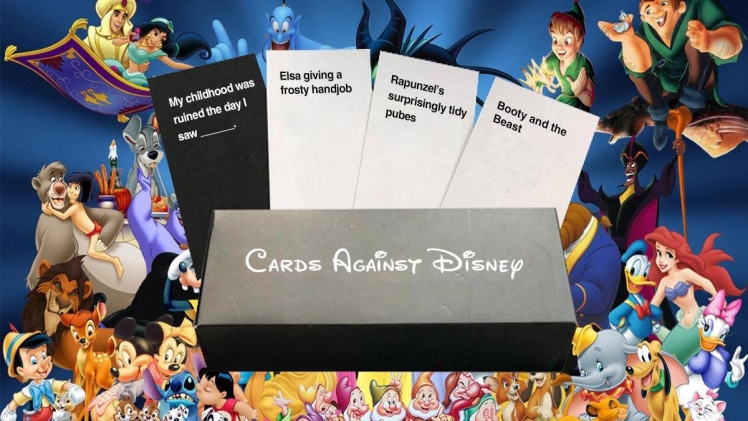 Wow! I can’t believe they did this?! They have taken Cards Against Humanity and pushed it into the one subject nobody thought possible…or unthinkable?! It is Cards Against Disney – where sweet childhood nostalgia slams headfirst into the deviant, repulsive and deeply hilarious world of Cards Against Humanity. Do not be fooled by the Disney theme, according to the description on PickCards, it’s definitely not for children under 17 years of age! Just like a movie rating, this is strictly for adults (or, at least, kids who haven’t grown up!) as the language is just as filthy as you would expect from this card game. So make sure your Grandma does not buy it by accident to play with the kids!

Whether you are a Game Master, who has played this game for ten years, or whether you are new to this card game’s concept, Cards Against Disney will appeal to all. This is every Disney Fan’s dream…that is, if their dream state is warped and deviant? But haven’t we all wondered about what really happens in the Wonderful World of Disney.

Can we be sure that no one took advantage of Pinocchio’s nose growing? How did Buzz’s friend get to be known as Woody? Was Bashful really so shy in Snow White? Did Dory ever socialize with the Little Mermaid?

The answers to these questions are as endless as the amount of cards in the box and they will leave you and your family and friends in fits of giggles and tears of laughter from this ultimate party game. Spoiler Alert: you may never watch another Disney movie in the same way again!

The first thing you need to know about this new board game is that you have a choice of what color it comes in. You can go for the traditional black box, with matching black question/statement cards, or you can buy it in a very distinctive red with the cards inside matching the box design too. I’m sure everyone reading this has played this game before. It consists of a total of 828 cards with 260 “question’ cards and another 568 white “answer” cards making up the rest. You can play the game with a minimum of 4 players and up to over 20! Each game should take about 30-90 minutes to finish but it could take longer as it’s hard to focus when you are crying with laughter!

Here’s a taste of what to expect from the cards in this risque game:

Black Card: ____ it’s the most horrible thing to happen in the Disney universe.

Sneaking on the set of 101 Dalmatians with peanut butter on your balls.

Now do you see this is not a game for kids?! To play this game well, you need to set your mind on dirt level. It’s the only way to be sure you can win!

Interesting examples of the white cards are available here:

The copious amount of lube needed to have sex with Grandmother Willow.

The highest amount of sexual pleasure.

The Nazi episode of Donald Duck

While some answers will simply make you giggle there are others designed to make you guffaw while others put their head in their hands in shame. Here’s a few more Cards Against Disney examples of the black cards:

____is how Ariel stayed alive after she became human underwater.

____shaped my childhood, making me the person I am today.

With the fact that, everyone has grown up with Disney and knows it so well, anyone playing the game can’t help but find it hilarious.

If you are looking for a great party game that you can play with your family and friends over pizza and beer, then this is definitely it. So set your mind in the toilet and get ready to put your imagination into the Twilight Zone. Pick up a box set as you plunge into Cards Against Disney. What are you waiting for? Have a blast with the best (and probably the worst!) party game ever!

Lens Hood Vs. Camera Matte Box: Which is Better?