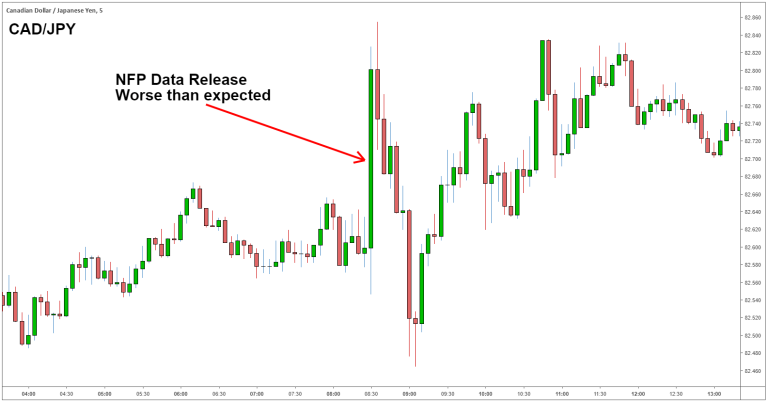 The U.S. Department of Labor releases monthly non-farm payroll data on the first Friday of each new month, and these figures can move the currency markets significantly. This is because investors always keep an eye on economic growth indicator data.

Inflation, gross domestic product, housing starts, and the monthly payroll report, which details the state of the American labor market, are among the most frequently monitored economic indicators.

In this article, we take a closer look at the most straightforward way in which the non-farm payroll affects forex trading. Before we get there, though, let’s review the fundamentals.

Non-Farm payroll, or NFP as it’s more often known, is one of the most closely watched economic measures of growth in the financial markets. Non-farm payrolls statistics show employment growth or decline in the United States non-agricultural sector during the preceding month. The strength and vitality of the American economy can be gauged from this non-farm payroll data.

The positions listed below are not included in the NFP report, although changes in employment in the United States are shown:

Why Can’t We Ignore NFP Numbers?

The BLS’s monthly employment report featured unemployment, job growth, and payroll figures. The number of people employed outside a farm or ranch is the most important economic indicator. Private household workers, volunteers, civil servants, and farmers are not included in this total.

Every month on the first Friday, currency markets react to the announcement of non-farm payroll data. The report’s calculations used some of the largest companies in the United States.

A household employment survey is used to compile these numbers for comparison with the unemployment rate. A broker may quickly connect the two, providing insight into the national jobless rate. Since fluctuations in the economy are reflected in changes in non-farm payroll figures, they impact currency trading.

The NFP report will affect all major currency pairs, but the GBP/USD is especially popular among traders (British pound to U.S. dollar). Due to the 24-hour nature of the forex market, all traders have equal access to trading opportunities based on news occurrences.

The idea behind this method is to give the market time to digest the data before making rash decisions about its significance. A trade is entered in the direction of the prevailing momentum after the initial swings have occurred and market participants have had time to assess what the number suggests.

As such, they sit on the sidelines until there is some indication that the market has settled on a direction for interest rates. Because of this, there is less of a chance that you will be forced out of the market before it has formed a definite trend and less chance of entering the market too early.

Less seasoned traders are far from the financial information portal and many may wonder why NFP data is so crucial to monitor, given the abundance of other economic news sources and indicators. Non-farm payroll figures are relevant to your trading strategy for numerous reasons, regardless of how you use this information to make your investments.

Among these are the following:

Is Trading in NFP Necessary?

Stock traders can make quick and long-term profits on various market instruments through NFP trading, which saves them time. Day traders can make substantial gains from trading the NFP announcement with as little as an hour of labor per month.

For swing traders, this is an opportunity to validate the trend bias and price rallies representing the economy and gauge the labor market in the U.S. for the next few weeks. If you’re planning on making a deal, remember the potential dangers of making a trade right after a news story has been released.

The dangers can be minimized by following a strategy that involves no trading until after the report is released. Investors who join time have a more straightforward time trading in NFP. That being said, why not open a trading account with this reputable and established online broker?