Firmware vs. Software: Similarities and Differences 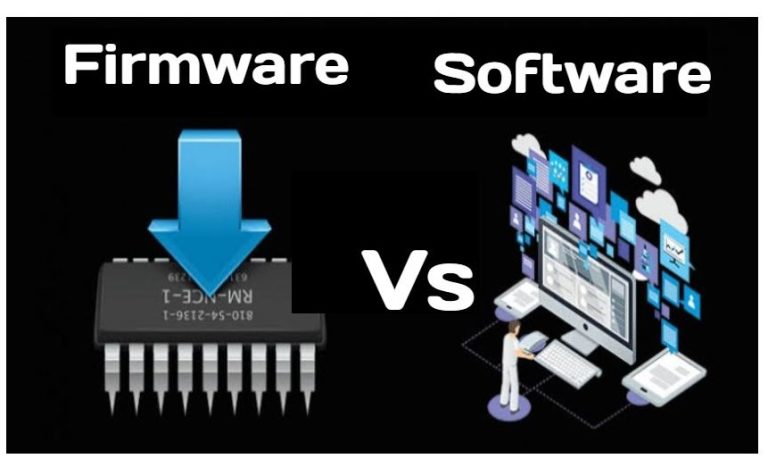 The world is becoming a digital world where most of the work is done by computers. Software and hardware are terms that are often used when discussing computers.

Much has been devoted to creating the latest technological products. There are different types of software and hardware, and you may encounter Firmware.

In the electronics industry, Firmware and software are equally popular. It can be challenging to distinguish between these words as they can sometimes have the same meaning.

For example, manual installation of Android OS can mean Firmware. When you flash an OS update on your Android phone, the software is designed for specific devices or Firmware.

This section will explain the differences, similarities, and some software uses and firmware cases.

In the computer world, Firmware is used as a specific category of computer software that provides low-level control over the specific hardware of any device. Firmware consists of essential hardware functions and provides hardware functionality services to higher-level Sirin Software operating systems.

The Firmware acts as a complete operating system for less complex devices that performs control, monitoring, and data encryption functions. It is handled by non-volatile memory devices, including EPROM, EEPROM, Flash memory, and ROM.

American scientist Ascher Opler coined the word “Firmware” in 1967. He used this word to describe the microprogram between software and hardware.

Updating the Firmware requires the ROM to be replaced or the EPROM reprogrammed in another way. Some firmware memory devices cannot be changed after installation.

All Firmware is divided into three main groups according to the level of hardware integration.

How do Firmware Updates work?

Firmware updates are usually provided to prevent firmware hacks, improve security, fix bugs, release new features, and sync with the latest media. It contains codes that tell the hardware to behave in a new and improved way.

Other devices connected to the internet are constantly searching for new Firmware and downloading and installing it. But, some require users to visit a website to download and install the firmware update. The number of adjustments may vary depending on the application of the tool. The Firmware of intelligent devices may not need to be updated regularly.

Phones usually update Firmware and software updates, so the phone will continue to work, and users don’t need to update the firmware version. Many electronic devices must remain functional while the Firmware is updated.

Software is data, programs, or instructions computers use to perform specific tasks. It is a different term for hardware that describes the physical components of a computer system. It is not affected.

You can also refer to software as a general term to describe documents, programs, and applications that run on any device. So, the software is a flexible part of a computer. Features are following;

Operating software: A software designed to run the machine’s hardware. In addition, it provides a platform for applications to run.

Programming software: This software provides the programming tools needed by a software developer. It also refers to the middleware between the operating system and the application software. Additionally, you get driver software that works with your computer’s hardware and software.

The terms firmware vs embedded software are interchangeable terms depending on the installed systems. In some cases, you will find Firmware known as low-level software.

For example, suppose you are working with a barebones design (without an operating system). In that case, you will have microcontroller-specific files (CPU support drivers and headers) and a few third-party drivers ( display and TCP/IP). These files can handle the hardware part of the software.

With drivers and headers, you can write application software; later, all files are merged into a binary file. If you’re running an operating system like freertos or VxWorks, the RTOS takes responsibility for memory management and status changes. However, you need to write application software with the help of microcontroller drivers, third-party drivers, and RTOS files.

Firmware is usually used to microcode the system embedded in most devices, while software refers to high-level programs. Changing Firmware is tricky, but you’ll never face much trouble if it’s software.

However, Firmware is the system software that controls the device’s hardware. Software, in general, is a set of instructions that allow your computer or other devices to perform tasks.

The Intro to Smart HVAC Systems Through IoT

Why Flixier is one of the most powerful video editors