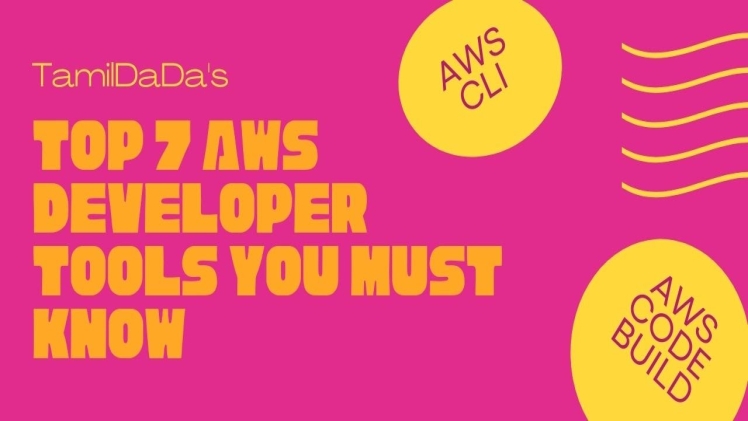 The AWS developer tools are designed to help you in storing, building, testing, and deploying your program in a safe manner. These tools facilitate DevOps, continuous integration, and continuous delivery (CI/CD) when used individually or in combination. Go on and read about the top 7 AWS Developer tools.

Also, if you are from Tamil Nadu, you can learn the given AWS developer tools by signing up for AWS training in Chennai.

The AWS Command Line Interface or AWS CLI is a centralized free tool for managing your Amazon Web Services. It allows you to handle a wide range of various AWS services from the command line and automate them using scripts with just one tool to download and configure. Simply download the proper version for your operating system and run the installer to install AWS CLI. This tool is compatible with all current versions of Windows, Mac OS X, and Linux, and it comes pre-installed on all Amazon Linux AMIs. The latest AWS CLI v2 has involved various new features. It has Improved installers, new configuration options including AWS Single Sign-On (SSO), and many more interactive features. Some benefits of AWS Command Line Interface are mentioned below:

AWS Code Commit is a fully managed cloud-based source control service that hosts private Git repositories in a safe environment. It is built on a highly dependable and redundant architecture. In the AWS Cloud Commit, you can securely store and manage assets such as documents, source code, and binary files anonymously. You can also define code quality. CodeCommit allows teams to collaborate on code in a secure, highly scalable environment and eliminates the need for the source system to be set up, managed, and scaled. So with AWS Code Commit, companies receive private repositories that are scalable, and extremely secure.

The benefits of the AWS Code Commit tool are:

Some of the top benefits of AWS Code Build are mentioned below:

The next tool that comes under this top AWS developer list is AWS Code Deploy.  It is a software deployment tool that is fully managed and automates program deployments to various services such as Amazon EC2, AWS Fargate, AWS Lambda, and also your on-premises servers. AWS CodeDeploy plays a vital role in making the delivery of new features easier and quickly. It reduces the downtime during application deployment and manages the complexity of application updates.

The main advantages of AWS Code Deploy are as follows:

AWS CodePipeline is a continuous delivery service that is fully managed and assists you in automating your release pipelines for quick and reliable application and infrastructure changes. Based on the release model you set, CodePipeline automates the build, test, and deploy parts of your release process more frequently. This allows you to provide features and upgrades quickly and consistently. It aids in the modeling, visualization, and automation of the software release process. It has a graphical user interface as well as a command-line interface. AWS CodePipeline may be easily integrated with third-party services like GitHub or your own custom plugin.

The benefits of AWS CodePipeline are :

AWS Cloud9 is an AWS Developer Tool. It is a cloud-based integrated development environment (IDE) that allows you to write, run, and debug code. A code editor, debugger, and terminal are all included. Cloud9 is pre-installed with key tools for popular programming languages such as JavaScript, Python, PHP, and more, so you don’t have to install files or configure your development workstation to get started with a new project. Because your Cloud9 IDE is cloud-based, you may work on your projects from any internet-connected machine, including your office, home, or anyplace else. It also offers the best smooth development experience for serverless apps, simply by allowing you to define resources, debug, and switch between local and remote execution.

A few advantages of AWS Cloud9 are:

AWS Cloud Development Kit is one of the most popular AWS Developer tools. It is an open-source software development platform that can provide your team with a high-level, object-oriented framework for defining cloud application resources in any programming language. You can also use the AWS Construct Library, which is a set of pre-built modules from the firm, to build your AWS architecture without needing to be an expert. AWS CDK uses AWS CloudFormation to provision your resources in a secure and repeatable manner. It also allows you to create and distribute your own unique structures that incorporate your company’s requirements, making it easier to get started on new projects.

The key benefits of the AWS Cloud Development Kit are: